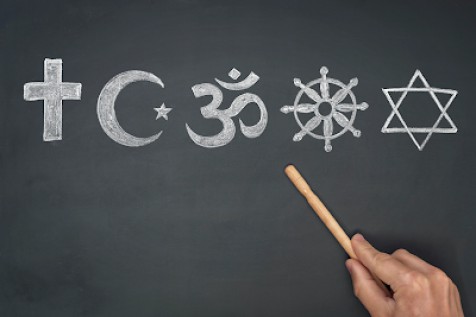 "In nature there is no more empty and repulsive creature than man who has escaped his genius and now turns stealthily his gaze left and right, back and everywhere. In the end, such a man cannot even be attacked: he is only exteriority without a core, a rotten costume, painted and swollen, a dressed-up ghost that cannot inspire fear and much less compassion. " (Friedrich Nietzsche)

Morals and ethics have been used by all religions as symbolic flags to justify the good programmed into the system. In this way many of the injunctions established by the various faiths, in various parts of the world, have assumed a juridical value also in the management of civil and criminal justice. I am not referring specifically to the Muslim "sharia" in which guilt and punishment relating to transgressions are sanctioned, even if this form of social control is the most evident. We can safely observe that more or less also in the other religious forms recognized as "official" by the various populations and nations the interference of religious norms in the judicial sphere is preponderant. An example comes from the differentiated condemnation of some aspects in sexual relations between the two genders such as marriage. In countries where Islam dominates bigamy and pedophilia are allowed (Muhammad had several wives and his last was a girl), while in countries where Christianity prevails such relationships are condemned and defined as a "criminal offense".

In short, I say this to mean that morality is an iridescent aspect in the various religions and that the transposition of religious norms into state laws represents the violation of universal ethical principles, in one case or another ...

Elemire Zolla wrote, in Descent to Hades and resurrection: "Without Being, the Entity does not exist". From this assertion it can be deduced that every religious order lacks that basic substance which allows any "Entity" to manifest equanimity and justice.

A true interspecies and transpersonal ethics can only be secular, agreeing with human nature in all its constituent aspects and not on the moralistic injunctions imposed by religion. Above all the monolatrous faiths (Judaism, Christianity and Islam), in fact, advocate the removal from nature, the lie and the misunderstanding of universal ethics.

Unfortunately in modern society, especially as a result of the influence of religions and of the male-dominated and patriarchal culture, the judgmental part of the mind has taken over, hence the great arrogance of use towards biological diversity. Children are the first exploited, in an ideological and religious sense, forced by their own parents and by social customs (by now consolidated) to submit to religious exploitation. Even before he has been able to understand what religion means, an innocent child is forced into a religious path, completely unconsciously. The child is tied to rituals and a faith that she does not know and is not old enough to understand if she is good or bad. In this way society is locked up in a prison of thoughts, and this is true for both religions and ideologies.

I personally believe that in order to move towards an awareness of common belonging and the equal dignity and complementarity of the various vital aspects, in short, of reciprocal interspecies relations, it is important that differences are recognized in order to be able at the same time to recognize natural ethics without forcing nature.

The abstraction of thought transformed into "religion" does not help the manifestation of a spontaneous "respect" towards one's fellowmen that manifests itself in an evolved society, not degraded in a scale of values on an ideological basis. This psychic "evolution" does not necessarily involve the use of so-called religious "tolerance", since such tolerance is itself a form of prejudice.

In the Hua Hu Ching it is said: "Tolerance is often required of ordinary beings. For integral beings there is no such thing as tolerance, because there is no such thing as any other. They have renounced all ideas of individuality and expanded their good will without prejudice in any direction. Not hating, not resisting, not contesting. Loving, hating, having expectations: all these are attachments. Attachment prevents the growth of one's true being. Therefore the integral being is not attached to anything and can relate to everyone with an unstructured attitude. "

The cause of the detachment from the "natural" state is a consequence of the conversion to religious dictates which has caused the progressive corruption and cancellation of the original naturalistic vision of the whole man. This substitution of values is also reflected in all artistic and cultural forms, in particular in the absolute Muslim iconoclasm but also in Christian moralistic fixations, both Protestant and Catholic or Orthodox, which tend to describe the evil of life and sexuality, attributing to the "worldliness" is the reason for suffering - obviously starting from the so-called original sin - and proposing as a solution the mortification of the flesh, asceticism and renunciation (in order to be able to earn joy in an afterlife).

Hence the need for a secular ethics also in the legislative management of the state. Against the abuse of religions, my friend Nico Valerio wrote to me: "Against the lexical abuses suggested by the Church, let us think, for example, of the non-existent semantic-political distinction between a" secular "state or a" secular "school, and a" secularist ", in the sense of a follower of that same idea; while the priests imply that the second term is a strengthening or pejorative of the first ... ". But basically secular ethics, understood in the original sense, should absolutely not be confused with a "non religiosity" but as an expression of a spontaneous "natural spirituality", which derives from Naturism or the philosophy of Nature.

True humanistic ethics does not belong to any religion; it is the true nature of man. This natural and secular ethics manifests itself in the condition of absolute "freedom" from any constituted thought form ...