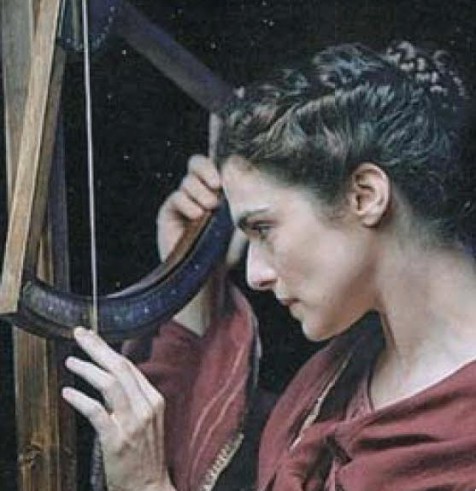 During the spring of 415 A.D. Hypatia was massacred and her body literally reduced to shreds by a mass of fanatics, each armed with a piece of glass or earthenware, who had to rage on the corpse the sign of faith and submission to the Church. Even today Hypatia is the emblem of freedom of thought and scientific research, of philosophical rationality, of women's independence and emancipation.

We remember Hypatia, symbol of all educated, intelligent and free women ... While the Church declared Saint Cyril, doctor of the Church and bishop, the one who sentenced the scientist and philosopher Hypatia to death, in Alexandria, Egypt. Thus was born the so-called "Christian Middle Ages", characterized by religious obscurantism and misogyny.
That these persecutions against the female world have occurred and continue to occur, as a consequence of the spread of patriarchal monotheistic religions, is not surprising (in minds capable of analytical discrimination). In fact, it is enough to see the repeated professions of hatred expressed by the Jewish god against all the other gods and against other peoples other than his own and one understands what the consequences would have been, increasingly bloody, in the subsequent actions of the sects of biblical inspiration.

The Jews first, and the Christians after, and finally the Muslims, brought to the extreme consequences that hatred towards the other, dissimilar to oneself, different in thought, or in gender. In fact, these so-called monotheistic "religions" are absolutely not such but simple racist ideologies. Other than "love" ... here love is exercised only towards one's own kit and kin (and the English term was never more appropriate) ".

And from this we understand what Christianity is ... all saints even the torturers of the inquisition, the killers of the witches, the pedophiles, the money hoarders of others, the sellers of indulgences, the burners of the heretics, the popes the cardinals i priests the nuns who killed in the convents, in the cathedrals, in the Vatican state ... hypocritical whitewashed tombs who still have the courage to preach the "good" ... to save the people of the "believers" from hell, who themselves created. Amen!