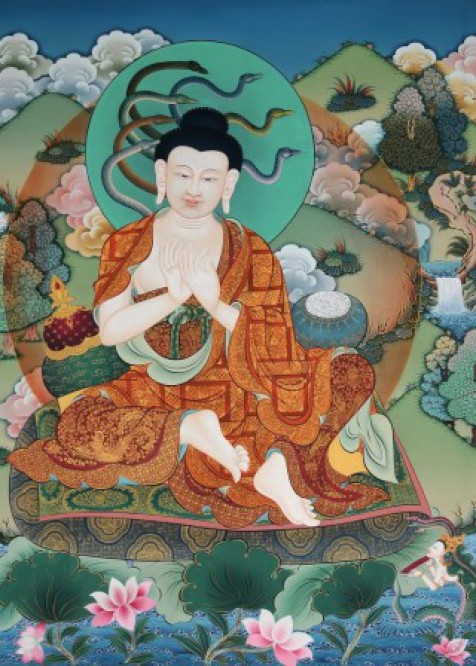 The Buddha himself had warned against absolutizing one's doctrine, considering it other than a simple means to achieve liberation ("a raft to cross a river, which must be abandoned as soon as one reaches the other side").

"Nomen est Omen" said the Latins ... and they certainly understood it because for them, as for all populations of Indo-European culture, the name carried with it a meaning. Not like nowadays when the names carry only the story of a hypothetical "saint" of Christianity.

No, once upon a time, for the ancient pre-Christian peoples the name established a quality, it was a sort of auspice, an "emblem" with which the new born was awarded. And then let's see what is the destiny assigned to "Nagarjuna" by analyzing his name. To begin with, Naga, who also stands for naked, indicates a snake. A sacred cobra, a deity (not that demonic serpent from the bible), while Arjuna literally means "the pure".

Both in the meaning of "naked" and "pure" implies a cleanliness, a sincerity, an honesty, a simplicity .. in short, a wisdom. And Nagarjuna confirmed these qualities. To begin with, he was born (probably), in the 2nd century AD. in Andhra Pradesh, in a family of Brahmins. According to a tradition, he was born under a Terminalia Arjuna tree, which determined the second part of his name. The first part, Naga, is due to a journey that would have led, according to some legends, to the kingdom of the naga, the divine cobras, placed under the ocean, to recover the Prajñāpāramitā Sūtra entrusted to them since the time of the Buddha Shakyamuni.

Of course these are all little stories added to give prestige but it is certainly true that Nagarjuna was a great philosopher and connoisseur of reality. Both followers of Madhyamaka and scholars of that school recognize Nagarjiuna as its founder. More generally, it can be said that he was one of the first and main original thinkers of the Mahāyāna, of which he systematizes the idea of the insubstantiality of all the elements of phenomenal reality.

His writings still today represent an almost unsurpassed peak of conceptualization of the metaphysician. In terms that today were taken up by philosophers such as Friedrich Wilhelm Nietzsche or - wanting to remain in an "Indian" context - by the great advocate of modern Advaita: Nisargadatta Maharaj. Here is what Osho, another teacher of our times said about him: "Nagarjuna was one of the greatest Masters that India has ever produced, of the caliber of Buddha, Mahavira and Krishna. And Nagarjuna was a rare genius. Intellectually not. there is no comparison possible with anyone else in the world. Such a sharp and penetrating intellect rarely occurs. "

Nagarjuna, in addition to temporal impermanence, indicated a further quality in the non-substantiality of phenomena: they were also empty of their own identity as they depended on each other on the temporal plane. All phenomena are therefore devoid of substantiality, since no phenomenon possesses an independent nature. He expresses his position in what is a capital work of Buddhism: the Madhyamakakarika, Stanzas of the middle way. Evidently reported by his followers, as was the case with the sayings of the Buddha, since Nagarjiuna believed that language is inevitably illusory as a product of conceptualizations and it is for this reason that he always refused to define himself as the holder of any doctrine. Because the experience of emptiness is not compatible with any construction of thought. And the very idea of emptiness risks being dangerous if an identity is attributed to emptiness.

The Buddha himself had warned against absolutizing one's doctrine, considering it other than a simple means to achieve liberation ("a raft to cross a river, which must be abandoned as soon as one reaches the other side").

Here are some quotes that can help the reader understand Nagarjuna's point of view better:

"The conditional co-production, this and no other we call emptiness. Emptiness is a metaphorical designation. This and nothing else is the Middle Way. Absolute reality cannot be taught without first relying on the practical order of things: without understanding absolute reality, nirvana cannot be achieved "

"If the world were not empty, one could neither obtain what one does not already possess, nor put an end to pain, nor eliminate all passions."

"If the enlightened do not appear and if the listeners have disappeared, spontaneous knowledge then occurs in isolation in the solitary awakened ones"