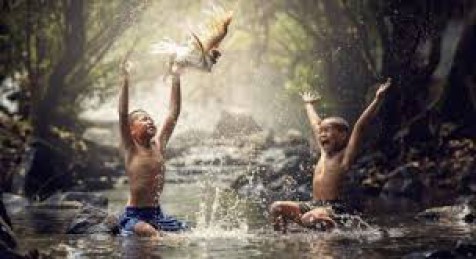 Very often speaking with friends about the concept of Lay Spirituality I am found to have to defend what is the function of the Guru in this path. Usually, as often stated by the two Kishnamurti (Jiddu and U.G.), certainly exponents of a trend "anti-religious" means that the spiritual quest must be addressed solely to self-knowledge, meaning that what is outside of us it is certainly also inside of us, so it is useless seek outside what we already have inside.

To know oneself - as Ramana Maharshi himself said - no instruction or action is needed, "the Guru can only point out the road but he cannot give you what you already are. "But it must be said that for the inveterate tendencies to turn outwards we are not in able to sink and rejoin the Self. Therefore we feel the need of a help, at least an example, a gesture of sympathy and love that encourage us towards the goal.

My experience in this sense, with Baba Muktananda, a realized master, may perhaps be significant for the shrewd reader.

My Guru / Disciple relationship represented a very "animal" relationship. Little or nothing appeared on the level of "formal" teaching. I felt stimulated to approach him with a silent, turned approach, observation, mimicry, actions performed, lightness, to the demonstrated human heat. In fact it was just a game of "hide and seek". I watched from around the corner every gesture and movement of him. In some moments, the most intimate ones, it seemed to me that knowledge was coming to me transmitted through these playful forces.

By analogy, the image of a mother cat that plays with her kitty. Through the game, the licks, the paws, the rolling, the growl, the meow, the mother cat transmits self-knowledge ... And the kitten discovers the feline nature of himself, instinctively, in that love game. The same happened for the inner awakening that manifested itself spontaneously upon contact with my Guru.

Everything happened without thinking about it, as an effect of the presence in same place and at the same time, experiencing common situations. There knowledge thus transmitted is imbued with various emotions, at times rebellion, sometimes affection, gestures, looks, smells, light touches, even irony and a sense of ridicule ...

In the end the result of that fantastic relationship, I could define it as love, is knowledge by subtle "induction" (or intuition?), by awakening the ancestral memory. The Guru did nothing but represented what I am too... It's like looking in the mirror, once your own image is recognized, nothing else is needed to add since the "image" of the spirit is permanent, it is not changeable as that of an aging face, the spirit is eternally young.

This is my feeling. In fact, lay spirituality is a path which surpasses all concepts of religion and behavior, is beyond outside the moral and also the immoral addresses.

This could give rise to doubts and even misunderstandings. Indeed for how it was described and judged, especially in the religions of Judeo / Christian matrix, amorality and immorality often come equate to the lack of spiritual conscience. But this thought is due to the fact that a rule of conduct has been superimposed, based on ethics and religious morality, on the natural state of man and on his genuine spiritual expression.

Lay spirituality cannot be an "attitude" or the result of conforming to someone's written rules, lay spirituality is simply being consciously what oneself is, without shame and without models of any kind. Therefore the capacity of the Guru of "teaching" through daily life, in terms of lay spirituality, lies in the intrinsic ability to "transmit" the "Truth" in everything that we manifest or that manifests itself to us.

The Guru is not a person, therefore, or at least not just one person since he can still appear in any form, but the illuminating intelligence that frees us from mental superstructures and from religious or moral fictions.