"In the pure Self there is no knowledge or ignorance ..." (Saul Arpino) 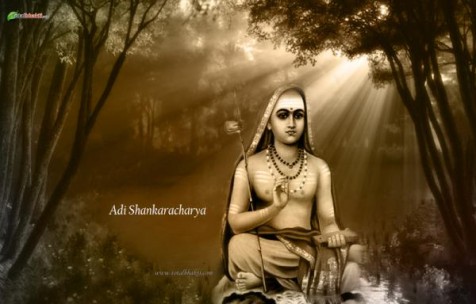 To better understand the implications of secular spiritual thought, beyond all theism, it is necessary to take a step back in time, bringing attention back to the formative dawn of the Advaita Vedanta, the nondual knowledge of Reality, expressed in the terminal portions of the Vedas (Vedanta ) and in the Upanishads.

For example, in the commentary on the Taittirya Upanishad made by the great sage Shankaracharya (of which we will speak in more detail below), it is said: “Knowledge and ignorance belong to the realm of name and form; they are not the attributes of the Self ... And they - name and form - are "imagined" (superimposed) as they are day and night in reference to the sun ".

The similarity with the sun is very appropriate here. From the point of view of the sun there is neither day nor night, nevertheless without reference to the sun there can be neither day nor night. It is only from the point of view of observation from Earth that day and night have a meaning and are superimposed on the sun. Likewise in the pure Self (the absolute non-dual Consciousness) there is no knowledge or ignorance. These are relevant only for finite intelligence (the dual mind), but they too can take on meaning only if superimposed on the Self.

The Self, which is Absolute Reality, has the nature of Absolute Knowledge, not in the sense of mental knowledge but in that of unconditional Awareness in which neither a subject nor an object nor the act of knowing appears. But that same Awareness, if observed from the point of view of the mind that underlies empirical knowledge-ignorance, produces the mirage of name and form in which the mind identifies itself ...
Adi Shankaracharya (788 - 820 AD) is that great wise, wise and saint who re-established the Advaita (Non-Dual) doctrine in India which for a time had been neglected due to the spread of Buddhism, Jainism and other cults. Adi means "original" Shankara is one of the epithets of Shiva and Acharya stands for "master". His original commentaries on the Upanishads, the Bhagavad Gita and the Brahmasutras brought to light the profound spiritual implications of the Advaita which was stagnating even following an orthodox and superficial religious practice (in vogue at the time), supported by the Brahmina priestly caste.

In his short existence, he reintegrated the true meaning of Vedanta, making it more comprehensible to the masses and refuting the formal Buddhist doctrines (mahayana, etc.) which slowly emerged from the religious custom of the whole of India. He also founded those "maths" (spiritual institutes) located in the five directions, of which the spiritual leaders bear his name. In the north in Badrinath, in the south in Kanchi, in the east in Puri, in the west in Dwarka and in the center in Sringeri. In each of these monasteries there is a master who derives his authority from one of the main disciples of Adi Shankaracharya.

Shankara, we said, is one of the names of Shiva. From the traditional point of view, Shiva is considered the aspect of the Trinity in charge of destruction. But this destruction also includes the ego, or ignorance, or that separate identity that prevents man from recognizing himself as One with the Absolute. Therefore Shankara means "favorable, propitious". He is the Absolute himself, the unspeakable love that arises from the "I" principle devoid of any identification, pure self-awareness (in Sanskrit Atman). Shiva is also called: "Satyam-Shivam-Sundaram" that is True, Auspicious and Enchanting.

Shankaracharya is considered one of the greatest exponents of Nondualism, (in Sanskrit: Advaita) which is the most subtle and "scientific" expression of human spiritual thought. For practical purposes, a philosophy cannot be defined, as it places itself "before" and "beyond" thought, therefore it can never become a topic of study or debate. Non-dualism was intelligently represented by one of its most recent advocates, Sri Poonja of Lucknow (called Papaji), with these words: "Imagine the One not followed by the two and then abandon the very concept of One". No mental speculation is possible on what is meant with this clear and absolute indication of reality.

The non-dual conception appears on the scene of human thought already five thousand years ago, in the last portions of the Vedas (Vedanta) called Upanishad, in which it is stated: “From the One the One rises, if from the One you remove the One only the One remains ”. In the 6th century BC Indian civilization is prey to empirical and mathematical depressions, in that period the Vedantic subtleties were shelved and replaced by ritual formalisms, theisms and sophisms of various kinds, for this reason the coming of the Buddha marked a flourishing of the authentic spirit in the attempt to overcome spiritual materialism.

It happened so that the Buddhist doctrine of the "sunyata" (emptiness or emptiness), in which substance and value to the forms and manifestations of the world are denied, would bring attention back to the perceiver. The description of empirical existence as the origin and source of suffering returned stamina and impetus to the realization of pure spirit, but already in the 5th century AD. the internal disputes in the various Buddhist systems were deteriorating the cleanliness of the Buddha's original teaching.

And it is precisely in that historical context that the great sage Adi Shankaracharya appeared on the scene, who from a very young age began to bring Hindu society back towards understanding the One without a Two. He did so by pointing to the daily spiritual practice of giving up dualistic thought forms: "Neti ... Neti" (not this ... not this). The great movement that was born of it is still alive and well and has therefore produced countless essays that refer to this line.

It cannot be said that Nondualism can be perfected, but as regards the descriptive way we can say that this statement is appropriate in the case of Ramana Maharshi, the sage of Arunachala, the solitary sacred mountain of Tamil Nadu, where he lived in permanent retreat in the first half of the last century. Ramana is universally recognized as the popularizer of the Nondualist Advaita beyond the borders of India. He, in verse X of his 'Forty Verses on Existence' thus states: "There is no knowledge separate from ignorance, there is no ignorance separate from knowledge. Whose knowledge and ignorance are they? True Knowledge is that which knows the consciousness that it knows, which is the basic principle ”.

According to Ramana's experience, there is no separation, and therefore everything is brought back to the Self. This sublime expression of Consciousness that knows itself has been subsequently explained, in a refined and culturally acceptable way for our speculative mind, by the Indian sage Nisargadatta Maharaj, who in his extreme descriptive simplicity limited himself to saying: "I am That". In the direct realization of the Self there are no descriptions that can adequately convey this ineffable experience, and this is why the refusal or refusal of any assumption and spiritual proposition was the characteristic of a last sample of the line, namely U.G. Krishnamurti - the saint who denied any holiness that was other than the pure state of awareness - exclaiming: "my words are like the braying of a donkey ... there is only the life that wonderfully does the job". Thereby signaling the final point of "no return" to empirical dualism.

Many stories I could still tell about the Advaita experience but I want to go back to Shankaracharya's teaching, and I move on to the translation of the song which, in my opinion, most represents the teaching of the great Master, it is called Nirvanasatkam, that is:

I am neither the conscious nor the unconscious mind,
not the intellect or the ego,
neither the ears or the tongue, nor the senses of smell, sight or touch,
and not even the ether, the air, the fire, the water or the earth.
I am Consciousness and Bliss. I am Shiva! I am Shiva.

I am not prana or the five vital arias,
neither the seven components of the body, nor the five sheaths or bodies.
Not the word, nor the hands or feet, the anus or the sexual organ.
I am Consciousness and Bliss. I am Shiva! I am Shiva!

Nor are they aversion or attachment, avarice or delusion.
Not arrogance or the feeling of jealousy, none of this.
Neither righteousness, wealth or pleasure are mine.
I am Consciousness and Bliss. I am Shiva! I am Shiva!

I am not virtue or vice, nor enjoyment or pain.
They are not prayer or the sacred place, they are not the scriptures or the sacrifices.
I am not food, nor who eats it, nor the act of eating it.
I am Consciousness and Bliss. I am Shiva! I am Shiva.

Not death, no doubt, no sense of class,
neither the father, the mother or this birth belong to me.
I am not a brother or friend, not even a teacher or a disciple, really.
I am Consciousness and Bliss. I am Shiva! I am Shiva.

I am thoughtless, formless, I am all-pervading,
they are everywhere, yet they are beyond in every sense.
I am neither detachment nor salvation, nothing that can measure itself.
I am Consciousness and Bliss. I am Shiva! I am Shiva!

Om Namah Shivaya. May Shiva (the Self) illuminate the mind of the reader!

Another hymn composed by Shankaracharya is the Shiva Manasa Puja, this hymn that I have been singing every night since 1973 before falling asleep. it has such power that it purifies the mind of the actor completely.

It is a hymn with a very delicate musicality, it is a list of ritual actions, it is a vision of Bhakti, the devotional non-thought that makes us Bacchi, according to Danielou's lightning intuition, Bhakta is the Bacchos, the one who is possessed by divine enthusiasm, serene and with self-aware sweetness.

According to Adi Shankaracharya: "Self-realization is always present"

Self, Self in English, is the spirit that interpenetrates everything, in the advaita it is called Brahman or Atman or Paramatmam.

A clarification: when we speak of the Self we are already in a state of duality. As Lao Tzu says: the Tao that can be said is not the true Tao. From a conceptual point of view, therefore with a description within the dual mind, the Self represents the absolute unconscious awareness of oneself, that is the Absolute one without second.

The individual self (ego) is the reflection in the mind of that awareness. And here you ask what is the mind? It is that power of reflection that allows the Self to manifest itself in infinite forms (Maya or Shakti. Time space energy). Since the reflection of the manifested images has the Self as its substrate, it can be said - as Shankaracharya said - that the world is unreal if seen as separate from the Self, but it becomes real if seen as the Self. The realized is not therefore a person but it is the Self, Like any dream character at the moment of awakening it ceases to exist as an "individual of the dream" and awakens as the dreamer subject. The similarity is imperfect ... as mentioned above ....

Realization is therefore nothing more than awakening to one's true nature, having always been that Self.