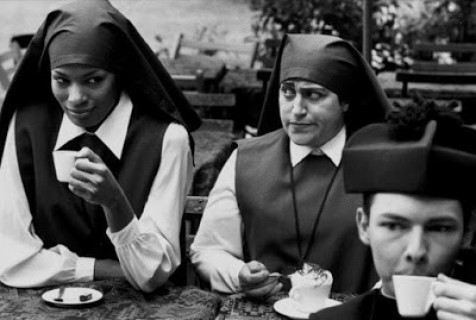 All the evil of the patriarchal religions
"The religious preachers have convinced the whole world:" You are sinners! "And that is good for them, because if you were not convinced their business could not prosper. You must be sinners, only in this way will churches, mosques and churches continue to exist. temples. Your staying in the sense of sin is their good "season", your guilt is the foundation of the most powerful churches, the more you feel guilty and the more the churches will continue to consolidate. They are built on your faults, on your sin, on your inferiority complex. Thus they created an inferior humanity ".... (Osho Rajneesh)

Let's see what recent scientific studies based on technologies, called 'Brain imaging', say, which allow us to see which parts of the brain are activated most during certain thoughts, words and actions. From these 'brain maps' it appears that rational thinking and language activate in most cases the left hemisphere, which is similar to a computer, as it accumulates the data of experiences in memory and repeats them on request. The right side of the brain is activated by music, by non-verbal language, which is made up of intonations of the voice, looks, gestures, facial expressions, etc. and creativity, which is the original combination of elements present in nature ...

Unfortunately in modern society, especially following the dominance of patriarchal culture, the judicial part of the mind has taken over, hence the great advance of monotheistic religions (Judaism, Christianity and Islam) based on separation and the sense of sin, on arrogance of the use towards other creatures and nature. These religions define themselves as unique and true, but oppress competitors considering it their right, in consideration of their own ideological "superiority" disguised as "love" and "tolerance"

In the Hua Hu Ching it is said: "Tolerance is often required of other common beings. For integral beings there is no such thing as tolerance, because there is no such thing as any other. They have renounced all ideas of individuality and expanded the their good will without prejudice in any direction. Not hating, not resisting, not contesting. Loving, hating, having expectations: all these are attachments. Attachment prevents the growth of one's true being. Therefore the integral being is not attached to nothing and can relate to everyone with an unstructured attitude ".

In Taoism, which is not really a religion or even a philosophy, but a form of naturalism lived without emphasis, refraining from excesses, both positively and negatively, is indicated as a natural attitude of life. Good and evil are understood but neither one nor the other is preferred. Good (yang) and evil (Yin) are the two aspects of the manifestation of existence on this earth. And it is for this reason that the Taoists mocked the good Confucius who, as a convinced rationalist, pushed for a social and political ethics, while they limited themselves to remaining in their original nature. Respecting the natural propensities, therefore not acquired for utilitarian convenience ...

It is said that one day Confucius thought he could convert a famous thief named Koshi to his morals, so he went to his lair and began to impart his teachings to him. But Koshi soon tired of the troublesome sermon. "You are more childish than a child - finally blurted out the thief - your morality will be good for you but for me it is worth nothing. Teach me the other side of morality if you want me to understand!" That was a great lesson for Confucius.
Happiness is our true nature and the pursuit of happiness is a way to obscure and hide it. In fact, an ancient popular proverb says "The best is the enemy of the good" ... because by pursuing the hypothetical best you do not experience the good that is at hand. Proof of this is also at the legislative level the continuous introduction of laws in society that do nothing but make justice more and more quirky and impracticable.

Perhaps the fantastic and the poetic should also be recovered in our social and productive life ... That poetry, which in the ancient world characterizes the form of man's questioning about reality and the meaning of his own experiences, is a significant indicator of an ORIGINAL CONCORDIA between a spontaneous acceptance of the other (not simply ethical) and the innate happiness that with rationality ends up being forgotten.

It is necessary to overcome the detachment that has almost led to naturalize the conflict between poetry and rhetoric, and this without wanting to efficiently promote and affirm and re-think the truth of joy as the result of an "ethical" concept.

"The man who does not want to be part of the crowd has only to stop being accommodating with himself; he should rather follow his own conscience that shouts at him: 'be yourself! You are certainly not what you do, think and desire now '. Every young soul hears this call day and night and trembles at it; in fact he foreshadows, turning his thoughts to his real liberation, the measure of happiness destined for eternity; happiness that he will never be able to achieve if chained by opinions and fear. And how absurd and desolate existence can become without this liberation! In nature there is no more empty and repulsive creature than man who has escaped his genius and now looks stealthily left and right, back and everywhere. In the end, such a man cannot even be attacked: he is only an exterior without a core, a rotten costume, painted and swollen, a dressed-up ghost that cannot inspire fear, much less compassion. " (Friedrich Nietzsche)