The creation of the world in the nondualistic Vedantic vision 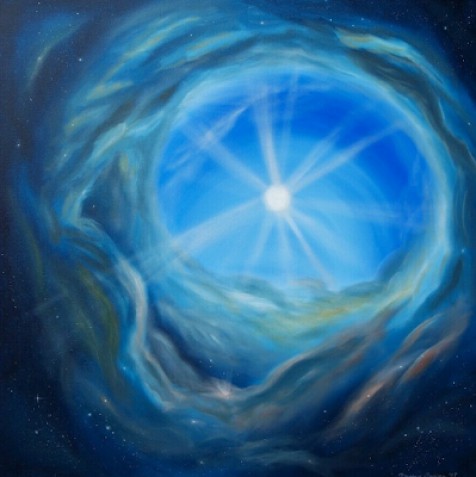 Sri Ramana Maharshi adopted three different points of view when he spoke of the nature of the physical world. He sponsored them all at different times, but from the comments he generally expressed on the subject it is clear that he considered only the first two theories described here to be true or useful:

(Theory of non-causality). This is an ancient Advaita doctrine which states that the creation of the world never happened. It is a complete denial of all causality in the physical world. Sri Ramana supported this opinion by saying that according to the experience of the 'jnani' nothing ever comes into existence or ceases to be because only the Self exists as the only and unchangeable reality. A corollary of this story is that time, space, cause and effect, the essential components of all theories of creation, exist only in the minds of the 'ajnani' and that the experience of the Self reveals their non-existence. .

This theory is not a denial of the reality of the world, but only of the creative process that brought it into existence. Speaking of the same experience as him, Sri Ramana said that the jnani is aware that the world is real, not as a meeting of interacting matter and energies, but as an apparition for no reason in the Self. He developed this by saying that since the real nature or the substratum of this apparition is identical to the existence of the Self, it necessarily participates in the reality of it.

This means that the world is not real for the jnani simply because it appears, but only because the real nature of the apparition is inseparable from the Self.

The ajnani on the other hand is totally unaware of the unitary nature and source of the world and, as a consequence, his mind constructs an illusory world of separate interacting objects, continually misunderstanding the sensory impressions he receives. Sri Ramana indicated that this worldview has no greater reality than a dream as it superimposes a creation of the mind on the reality of the Self. He summarized the difference between the point of view of the jnani and the ajnani by saying that the world is unreal if it is perceived by the mind as a set of distinct objects and is real when it is directly experienced as an appearance of the Self.

If his interlocutors found it impossible to assimilate the idea of 'ajata' or non-causality, he taught them that the world came into existence simultaneously with the appearance of the thought "I" and that it ceases to exist when the thought "I" is absent. This theory is known as 'drishti-srishti', or simultaneous creation and in fact states that the world that appears to an ajani is the product of the mind that perceives it and that in the absence of that mind it ceases to exist.

Although Sri Ramana has sometimes said that drishti-srishti was not the ultimate truth about creation, he encouraged his followers to accept it as a working hypothesis. He justified this approach by saying that if the world can be considered consistently as an unreal creation of the mind, then it loses its attraction and it becomes easier to maintain awareness of the "I" thought without distraction.

(Gradual creation). This is the common sense opinion which states that the world is an objective reality governed by the laws of cause and effect that can be traced back to a single act of creation. It includes virtually all Western ideas on the subject, from the "big bang" theory to the biblical account of Genesis. Sri Ramana only appealed to theories of this nature when he was speaking with interlocutors who were reluctant to accept the implications of the theories 'ajata' and 'drishti-srishti'. Even then, he usually indicated that such theories should not be taken too seriously as they were only promulgated to satisfy intellectual curiosity.

Literally, 'drishti-srishti' means that the world exists only when it is perceived, while 'srishti-drishti' means that the world existed before anyone's perception. Although the first theory seems vicious, Sri Ramana argued that true seekers should be satisfied, both because it is an approximation close to the truth, and because it is the most beneficial attitude to adopt if one is seriously interested in realizing the Self.

In "doing not doing" there is no realization ...

The Spirit is in the Heart...

Lay spirituality and life in the world

Full moon in July, return to nature and Gurupurnima