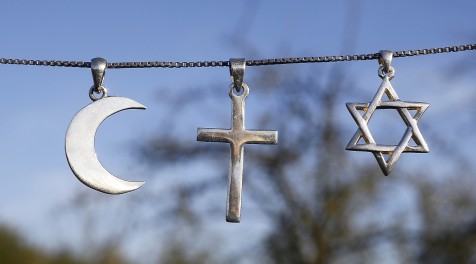 In the spiritual field the syncretic idea would be the most equitable and lay and this idea was also present in ancient Rome and in all the countries of the old continent, at least up to the supremacy of the dominant monolithic cults (Judaism, Christianity and Islam).

Sincretism it is the the only form of thought that guarantees equal dignity to every religious or atheist belief, considering it part of the moral and philosophical patrimony of humanity.

Unfortunately in Italy we have not yet come to a freeing from religious dominance ... Indeed, Christian dominance has been joined by Muslim and today we are witnessing a race for supremacy, with the state trying to save goat and cabbage by erasing established popular traditions, such as of the nativity scene realized in the schools, favoring at the same time halal "parties", with public slaughter of animals without stunning.

Here I would like to add some other "dirty reason" that imposes on Italy the subjection to the monolatric religions, improperly called monotheists: Judaism, Christianity and Islam. The motivations are different and weigh on the choices of each political center, right or left that is ... Yes, you read that correctly…

First of all there is the subjection to Zionist Judaism, which has economic reasons, since the big banks and financial powers are held by Zionists, then there is the traditional respect for the Vatican, which is also endowed with vast estates, real estate and gold deposits. Also because of the papal control exercised on so many believers (despite the continuous defection of disappointed faithful the Catholic church maintain a strong political weight). Finally in recent years the religious race has seen the advancement of Muslim power especially in the center-left party , due to its favorable immigration policy, to the construction of new mosques and to the "substitution" of citizens (due to the decline of the native population and the conspicuous decline in popular votes in that area).

In short, if before the laity had to oppose only the Catholic ecclesiastical, today they are attacked by many parties, Zionist and American consumerism, the Vatican and the Muslim imam. Among other things, the three strains threaten a "fusion" falsely defined "syncretic" (since it includes only the creed of monolatric matrix but not other non-theistic philosophies, such as Buddhist, Taoist, etc.), this false sincretism is functional to a NWO political, economic and fake-religious.

"To speak, think and live without saying I" - Interview by Lorenzo Merlo with Paolo D'Arpini

The origin of "I am"

Free will or predetermined destiny?

Higher Self, what it is